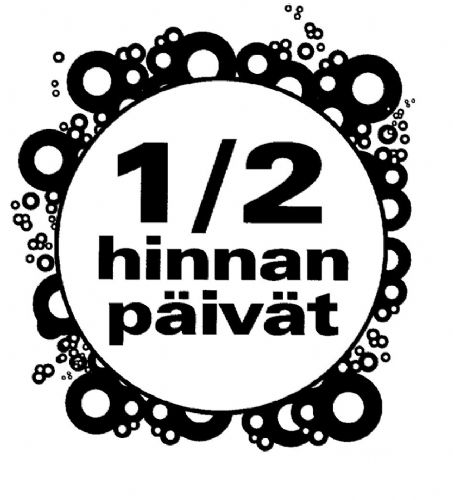 On 18 October 2016, the Finnish Supreme Administrative Court gave its ruling on the likelihood of confusion between two figurative trade marks both entailing indication of half-price (in Finnish "½ hintaan"). Veljekset Halonen Oy, a Finnish clothing wholesale company, had in 2010 obtained registration (No. 251764) for a figurative trade mark  (text: "½ price days") for clothing, shoes and headgear in class 25.

Faor Oy, also a Finnish clothing wholesale company, known for their Jesper JUNIOR children's clothing and shoe collection, lodged an opposition against the trade mark based on their prior registration  (No. 246488, text: "½ price days") covering in class 25 the same goods as the registration of Veljekset Halonen Oy.

Faor Oy went on to appeal the decision to the Market Court.  The Market Court's view was similar to that of the Finnish Patent and Registration Office as it stated that one should especially take note to the differences between the figurative elements of the marks. In Veljekset Halonen Oy's mark these were the various circles and their disposition and, in Faor Oy's mark, the peculiar expression on the face included in the mark. These distinctive elements resulted in the overall difference between the marks. Faor Oy also claimed that its mark was a trade mark with a reputation but the Market Court considered that the evidence submitted to support this claim was not sufficient.

Still being dissatisfied with the decision, Faor Oy appealed the decision to the Supreme Administrative Court. Faor Oy was of the opinion that the textual part of its mark "1/2 -hintapäivät" was not descriptive and was more of a binding and public price promise. Further they considered that there was a likelihood of confusion as then the dominating text elements of the mark would be similar. They also e.g. stated that the likelihood of confusion would take place due to the phonetic similarities between the marks. Veljekset Halonen Oy on its side leaned e.g. on the fact that the figurative elements of the marks were the most relevant and sufficiently different from each other. Further, even if the text elements of the marks would be compared, Faor Oy would not have a monopoly on such a general price promise.

After evaluating the matter, the Supreme Administrative Court, without giving any written analysis on its reasoning, rejected the appeal. Thus these the marks will now co-exist on the market. It is quite interesting to note that the words indicating "half price days" were actually considered descriptive for the goods themselves, namely clothing, shoes and headgear.

The decision (in Finnish) can be read here.

Sharing on Social Media? Use the link below...
Perm-A-Link: https://www.marques.org/blogs/class46?XID=BHA4455