In Case T-335/15, Universal Protein Supplements Corp. ("Universal Protein") appealed a Fifth Board of Appeal ruling of the EUIPO that they could not register a trade mark consisting of "a silhouette, represented in black, of a person adopting a typical body-building pose displaying the muscles of his body” in classes 5 (nutritional supplements), 25 (clothing; footwear) nor 35 (on-line retail store services featuring nutritional supplements, health and diet related 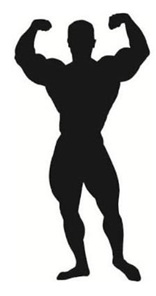 The EUGC (the "Court") upheld the EUIPO Examiner's decision because the figure lacked distinctive character, citing Article 7(c) of Regulation No. 207/2009 which prohibits registration of exclusively descriptive marks.

The test which the Court undertook was determining whether there was a "a sufficiently direct and specific relationship between the sign and the goods or services… as such as to enable the public… to perceive immediately, without further reflection, a description of the goods and services in question or one of their characteristics" (Universal Utility International v OHIM (Greenworld)). The Court iterated that the reason for the prohibition is that descriptors should be available for everyone's use (OHIM v Wrigley; Agencja Wydawnicza Technopol v OHIM).

Universal Protein made 3 claims, each rejected by the Court which iterated a general remark that the mark needs to be understood in context, whereby each applied for class may use the figure of a body-builder to indicate that its use is for body building and/or body builders. First, Universal Protein argued that the Examiner failed to consider the mark as  a whole, including its stylised position and features. The Court rejected this contention, noting that a general silhouette does not amount to a stylised form, especially one as typical of a body builder as the mark in question. The particular details were not found so unique as to be memorable (see: Trautwein v OHIM (Representation of a dog; Trautwein v OHIM (Representation of a horse)).

Second, Universal Protein claimed that the mark was not merely a representation; it was something more "allusive". The Court responded that the mark did "not require any mental effort on behalf of the relevant public" for the public to immediately understand that the mark relates to a body builder or body building.

Third, Universal Protein contended that there are an unlimited number of ways to depict a body-builder, so there is no monopoly on the description. Even if true, the Court noted that this is irrelevant for determining whether a mark is a descriptor which rests on the aforementioned test.

The case represents a useful reminder of the Court's reasoning with respect to descriptive marks and why silhouettes of everyday things will generally be construed as descriptive.

Sharing on Social Media? Use the link below...
Perm-A-Link: https://www.marques.org/blogs/class46?XID=BHA4449