In Judgments T-461/15 and T-753/15 issued on 11 October 2016, the General Court dismissed two appeals in the latest Gucci v. Guess saga - see here for the Italian episode and here for the French episode as reported on this blog.

Both actions were brought on the basis of Article 8(1) (b) and 8(5) of the EUTMR. At first instance, the Cancellation Division and the Opposition Division reached different results, respectively rejecting and upholding the actions.

The Fourth Board of Appeal concluded that there was no likelihood of confusion ruling that the signs were not similar in both actions.

Gucci appealed claiming that the signs are highly similar, inasmuch as each of them consists of a combination of capital ‘G’ letters, with the result that they will convey the same overall impression to the relevant public, the attention of which will be attracted more by the element ‘g’, which they have in common, than by their minor differences. Furthermore, the earlier marks have an exceptionally high level of distinctiveness and an indisputable reputation. In addition, the likelihood of confusion is further increased by the fact that the opposition was based on the earlier marks’ membership of a family of marks, which all consist of a combination of capital ‘G’ letters. 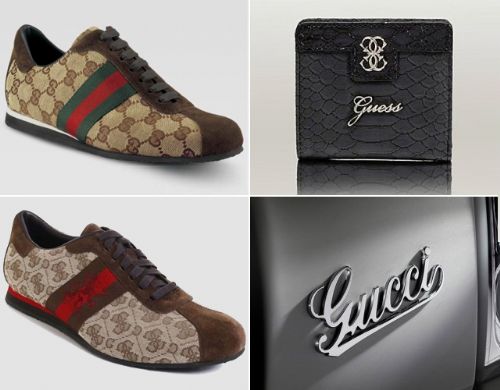 The Court rejected those arguments and upheld the findings of the BOA. Visually, for the Guess mark, the relevant public will not it break down into its various elements, and by retaining the image of the sign as a whole, it will not perceive in that mark the capital letter ‘G’, represented by the earlier marks, but rather an abstract ornamental motif. Moreover, having regard to the stylisation of the sign and to the fact that its elements are interlocking or joined together, it could be perceived both as reproducing stylised letters, such as the capital letter ‘X’ or the letter ‘e’, and as a combination of figures and letters, such as the figure ‘3’ and the letter ‘e’. From an aural and conceptual perspective, the marks will be perceived as a purely figurative sign without word elements, or, at the very most, as referring to  the capital letter ‘G’, which does not have any semantic content of its own.

Therefore the GC confirmed the marks are overly different. Having regard to the representation, positioning and stylisation of their components and to their completely different structure, the signs at issue gave a completely different overall impression. Since one of the necessary conditions for the application of 8(1) (b) provision was not satisfied, it was not necessary to examine whether the goods and services covered by the marks at issue were similar,  As regards the ground set out in Article 8(5) of EUTMR since the signs at issue were dissimilar, the first condition necessary for the application of that provision was not satisfied and the actions were also rejected on that ground.

Sharing on Social Media? Use the link below...
Perm-A-Link: https://www.marques.org/blogs/class46?XID=BHA4441