In Case T-631/14, the General Court dismissed the appeal in the following opposition

Class 46 readers may remember C. Louboutin had successfully overcome OHIM’s objections on absolute grounds and the Second Board of Appeal had confirmed the sign could be registered as a position mark (see post here).

After the mark was published in 2011 in the CTM bulletin, the famous shoe manufacturer saw red one more time after an opposition was filed by German competitor. 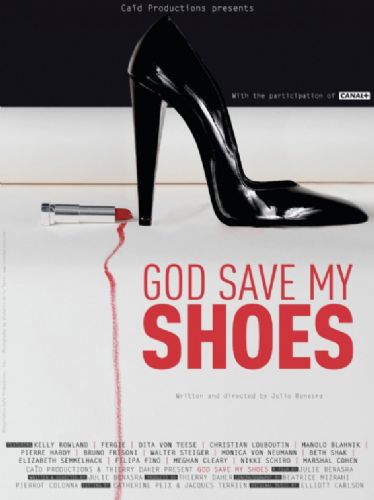 Both OHIM and the General Court found that the conflicting signs are not similar : indeed, there are no relevant visual similarities, noting that the elements constituting the earlier mark were equally important and that the red rectangle was not dominant. The Court found that the Board of Appeal had rightly held that the earlier sign was a banal rectangle graphically. In addition, neither the size nor positioning of the word "shoes" warrant the conclusion that the red rectangle is likely to dominate the overall impression conveyed by the sign at issue.

The same applies, a fortiori, with regard to the red color as such. Although it is true that it is likely to attract more the attention from consumers, it occupies a small part of the sign, contrary to what the opponent claims. Therefore it does not affect the opponent's argument concerning the similarity of the two shades of red.

Moreover, the signs are not similar phonetically and showed no concept in common.

Finally, it is irrelevant that the earlier figurative trade mark may be affixed to the outer sole of high heel shoes, so that only the red rectangle with the word "shoes" would cover part of the sole corresponding to the arch of the foot, namely its visible part. Indeed, as noted by OHIM, the earlier mark must be taken into account for the purposes of comparing the signs in the form in which it was registered, and the prospective analysis of the likelihood of confusion between two marks cannot dependent on the commercial intentions, whether realized or not, and naturally subjective, of trademark owners (See Judgment T.I.M.E. ART/OHMI, C‑171/06).

Therefore, in the absence of an identity or similarity between those signs, which is one of the cumulative conditions for the finding of a likelihood of confusion within the meaning of Article 8 (1) b) of Regulation No 207/2009, said risk is excluded in this case.

Sharing on Social Media? Use the link below...
Perm-A-Link: https://www.marques.org/blogs/class46?XID=BHA4138