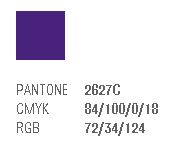 On 5 May 2010, PLAY Brand Management Limited applied to the Polish Patent Office for the right of protection for a single color trade mark Z-369967 defined in PANTONE scale as 2627C, for goods and services in Classes 9, 35 and 38.

The Polish Patent Office refused to grant the right of protection and decided that the applied sign was not inherently distinctive in relation to communications services for mobile phones, and the applicant has not demonstrated sufficiently that the mark has acquired distinctivenes through use. PLAY submitted request for re-examination of the matter. The PPO ruled that the sign in question may serve as a trade mark, since it was applied graphically and identified using the code recognized at international level, i.e. Pantone number. Such a figurative representation of a single color is in line with the requirements set for a designation that in order to fulfill its function as a trade mark must be clear, precise, complete in itself, easily accessible, understandable, fixed and objective. However, while analyzing the distinctiveness of the applied trade mark in concreto, the PPO stressed that, according to settled case-law, the essential function of a trade mark is to guarantee to the consumer or end user the identity of the origin of the designated goods or designated services, by allwowing him to distinguish the goods or services from the goods or services of different origin. The goal of distinctiveness of a trade mark is to provide a given sign with such features that in the minds of market players they will clearly indicate that the product (or service) marked in this way is derived from the specific entity. Therefore, the attention sould be paid to the customary use of the trade mark, as a designation of origin in the specific sectors, as well as the perception of relevant consumers. In the opinion of the PPO when it comes to color per se, the existence of distinctiveness (without any prior use) is possible only in exceptional circumstances, in particular, when the number of goods or services for which the trade mark was applied for is very limited and the relevant market is very specific. Those conditions must be interpreted in the light of the public interest, which is based on the fact that the availability of colors cannot be unduly limited for all other entrepreneurs. The PPO noted that the modern technology allows to generate an almost infinite number of shades of each color, but in assessing whether they differ from each other, one should take into the perception of a relevant group, and therefore the average consumer. The number of colors that people are able to actually identify, is small, therefore the number of colors available as potential trade marks that would allow for distinguishing the goods had to be regarded as very limited. Moreover, the market for mobile services is not narrow and specific. Such market does not only cover telecom operators, but it is a collection of current and potential buyers of a product or service, respectively, its size depends on the number of buyers that express interest in all products, with an adequate income and availability of products for purchase. Market size is a characteristic that describes the quantitative state of the market at a given time in number of consumers (users) of a given type of goods or services. The PPO stated that the scale of Pantone, as the RAL or CMYK scales, is a very precise tool used to describe the color, but little practical from the standpoint of conditions of a normal trade and market turnover. The description of the Pantone color will not be a sufficient indication for the average consumer. The PPO also decided that less than four years (the company started its operation in 2007, and market survey evidence was conducted in 2011) could not be considered as a sufficient period to establish that the sign was in long-term use. In the context of proving that the sign has acquired secondary meaning, such time was certainly too short. PLAY Brand Management filed a complaint against this decision.

The Voivodeship Administrative Court in its judgment of 9 October 2013 case file VI SA/Wa 1378/13 dismissed it. The Court ruled that the PPO properly examined all the evidence material and properly justified its decision. The VAC as the PPO relied on the opinion of legal commentators and the so-called "color depletion/exhaustion" theory. According to this concept, the number of colors that the human eye is able to recognize is small and limited. Therefore, none of the colors should be subject to anyone's "ownership", or generally speaking - the exclusive right, and these colors should be keept in the public domain, and therefore freely available for all entrepreneurs. The theory of shades' confusion support the first one. The second provides that human perception is so limited that the average consumer is not able to distinguish between a large number of shades of different colors. Applying both theories to present commercial realities it should be borne in mind that the majority of trade marks exists in a environment where decisions on the purchase of goods or use of services are made hastily, without much hesitation on the part of consumers. It is difficult to expect that consumer will conduct an analysis and comparison of similar shades of color, and on this basis, they will be associating the product with its origin. The Court also agreed that the acquired distinctiveness has not been proven. Surveys were conducted in a group consisting of 1000 respondents who use mobile phones and thus who should have knowledge about the market and mobile network operators. However, these people differently responded to the two questions: i) with which mobile operators' brands do they associate the color, and ii) with which brands do they associate the color. For the first question, 59% of respondents indicated PLAY as the operator, and only 11% respondents of the same group associated the color with PLAY while answering the second question, although the results should be concurrent, because the second question has not been addressed to random group of people, but a group of people who use mobile services. PLAY Brand Management filed a cassation complaint.

Sharing on Social Media? Use the link below...
Perm-A-Link: https://www.marques.org/blogs/class46?XID=BHA4058