The OHIM Cancellation Division has invalidated, in its entirety, the CTM CUORE DI FORMAGGIO GRANA ITALIANA (fig.) that had been registered for “cheese” in class 29 and for “cooking utensils and instruments, hand operated, cheese curlers, cheese graters”, in class 21. 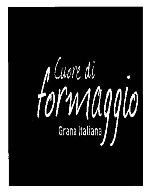 The Consorzio per la tutela del formagggio Grana Padano filed a request for a declaration of invalidity against CTM No 9534281 for the figurative mark CUORE DI FORMAGGIO GRANA ITALIANA registered, as of 1 April 2011 for:

The request for invalidity was filed on the basis of both absolute and relative grounds, in particular, the invalidation was requested:

and invoked the Consorzio’s prior collective CTMs GRANA (fig.) and GRANA PADANO (fig.) registered for “cheese” in class 29 (and in relation to which the Consorzio claimed a reputation in several EU countries) as well as on the Protected Designation of Origin (“PDO”) for GRANA PADANO cheese.

In its decision No 6444 C, the Cancellation Division fully upheld the invalidity request. In line with the Consorzio’s claims, the decision confirmed that the contested mark indeed constituted a misuse or evocation of the earlier PDO GRANA PADANO with reference to cheese products so that the mark should never have been registered for “cheese”, while with reference to the remaining goods in class 21, the Cancellation Division rightly concluded that the mark would take unfair advantage of the repute of the earlier GRANA PADANO mark if allowed to continue to be registered for these goods.

Sharing on Social Media? Use the link below...
Perm-A-Link: https://www.marques.org/blogs/class46?XID=BHA3857