In case T-42/09, two “four-sided figure” Italian parties were opponents, namely Editrice Quadratum for the applied for word sign QUADRATUM for goods in Class 30 against A.Loacker SpA on the basis of its previous CTM right LOACKER QUADRATINI also registered for goods in Class 30, in particular “biscuits, snacks”.

The Opposition Division had partly upheld the opposition for some goods “pastries, confectionery, eatable ice-creams, bread, cacao”. The BoA cancelled the decision and rejected the action, which was upheld by the General Court.

Firstly, the relevant consumer has an average degree of attention due to the nature of the goods. The goods are identical, however the signs are different. 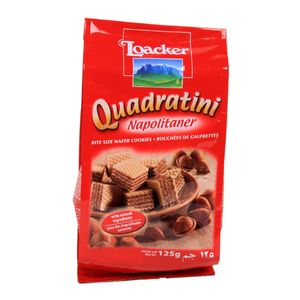 The earlier mark is composed of two words, with the ending “tini” which is typically Italian, whereas the contested CTM ends in “tum” which is representative of Latin language sound. The term LOACKER being a purely fantasy word, attracts more the consumer’s attention. Further, for the Italian-speaking consumer “quadratini” can be understood as “little squares” whereas it is highly unlikely that the consumer associates “quadratum” with the shape of the product since it is not an Italian word nor a diminutive [although it is the Author's understanding that knowledge of Latin- not just legal phrases - is incredibly high amongst Italians- due to its ancient common roots].

The BoA based this reasoning on common knowledge- at least for any Italian speaker- that many common Italian diminutives are used for food, such as “triangolini” (little triangles), “stelline” (little stars ), “orechiette” (little ears), cubetti (little cubes), dadini (little dice), etc. Thus, there is no conceptual similarity even in the presence of the same root “quadrat”.

Finally, the differences are so significant that no average observant consumer would confuse the marks, even if they are used for the same foodstuff.

Sharing on Social Media? Use the link below...
Perm-A-Link: https://www.marques.org/blogs/class46?XID=BHA3167