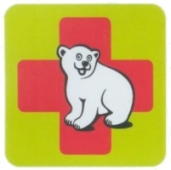 On 20 August 2007, the Polish company ALTA Sp. z o.o. from Poznań applied for the figurative trade mark Z-329092 for goods in Class 5, 42 and 44. The Board of the Red Cros submited to the Polish Patent Office observations as to the existence of grounds that cause a right of protection to be denied. The PPO refused to grant the right. ALTA filed a complaint against this decision.

The Voivodeship Administrative Court in its judgment of 12 October 2010 case file VI SA/Wa 1095/10 noted that Article 131(2)(iii) of the Polish Industrial Property Law provides that the right of protection shall not be granted for a sign, if it incorporates the abbreviated names or symbols (armorial bearings, flags, emblems) of other countries, international organisations, as well as official signs, hallmarks indicating control and warranty adopted in other countries, if the prohibition of registration follows from international agreements, unless the applicant is able to produce an authorisation issued by a competent authority, which authorises him to use such signs in the course of trade.

The Court ruled that this prohibition applies not only to those symbols as such, but it also prohibits the registration and use of the trade marks that are some kind of imitation of those symbols and copying the relevant characteristics of the heraldic symbols is this kind of imitation. The PPO rightly found that the trade mark in question contains the image of the cross which is at least an imitation of the symbol of the International Red Cross because of similar color (red) and shape. Placing the image of a bear on the cross does not change the fact that this trade mark contains also an image of the cross imitating the Red Cross sign. The provision of Article 131(2)(iii) of the IPL excludes the possibility of granting trade mark rights to the signs that contain symbols of international organizations (if there is no consent of the holder), so other elements of the mark does not matter. Thus placing in the applied sign the image of a cross which is at least an imitation of the International Red Cross symbol, deprives the sign the possibility to be registered as a trade mark. The Judgment is not final yet.

Sharing on Social Media? Use the link below...
Perm-A-Link: https://www.marques.org/blogs/class46?XID=BHA2153