Seeing that another one of the seasons of chocolate is just safely behind us, I thought another case in relation to chocolate was in order. Actually, this case is already over a year old, but had not been reported until recently. 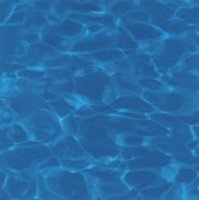 In its decision of the 19th of November 2004 the National Board of Patents and Registration (NBPR) rejected Oy Karl Fazer Ab’s opposition against the Finnish designation of International Registration No. 771164. (above picture) According to the NBPR, the opponent had not stated reasons why the International Registration lacked distinctive character, and also that there was no likelihood of confusion between the marks (even though the goods were identical or similar) as the colour registration could not be held to cover all possible shades of blue. (Opponent's mark below)

The Board of Appeal, however, disagreed and in its decision of the 4th of February 2008 returned the matter to the NBPR for renunciation of the designation. (The renunciation was subsequently published on the 16th of October 2008.) The Board of Appeal held that the subject mark did indeed lack distinctive character as the mark brought to mind a picture of water’s surf and the shape of the mark implied that the mark was intended to be used as a broader solid area and not as a rectangle-shaped figurative mark. In such use as a solid area, the mark would lack distinctive character.

Sharing on Social Media? Use the link below...
Perm-A-Link: https://www.marques.org/blogs/class46?XID=BHA1067